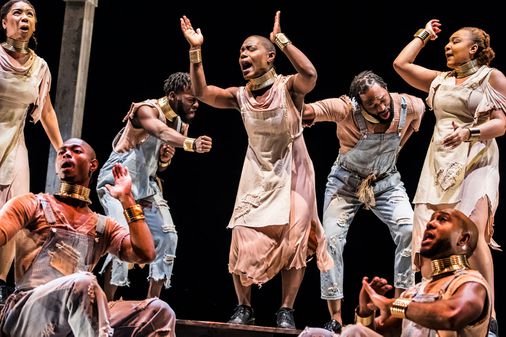 “We really feel right now, given that our democracy is at stake, given so much in the world that feels like we’re on a precipice, that now is not the time to step back from the most pressing challenges we have,” Penoi said in an interview.

The season she’s plotted with executive director David C. Howse is designed to appeal to theatergoers who, in Penoi’s words, “are looking to really have a conversation about how we’re making the world a different place from the one we have now”.

Inspired by the Stono slave rebellion in South Carolina in 1739 and the Negro Act of 1740 – which prohibited enslaved Africans from learning to write, congregating in groups or earning money – “Drumfolk” dramatizes “the times when the drums were taken away from enslaved Africans, when the beat moved from the drums to the body,” Penoi said.

Next, from Oct. 26-30 at the Emerson Paramount Center, acclaimed clown and actor Bill Irwin in “Bill Irwin On Beckett,” which examines a performer’s relationship to Beckett’s plays. The work includes excerpts from “Waiting for Godot” (in which Irwin played Vladimir on Broadway in 2009), the novel “Watt” and the prose pieces “Texts for Nothing”.

“Bill highlights the social justice nature of Beckett’s work, which is not often talked about,” Penoi said. “He really brings a different lens to an artist that many of us think we know well.”

From November 4-6 and November 17-20, ArtsEmerson will present “Theatre for One: We Are Here,” a virtual production of six short solo plays written and performed by theater artists from Nairobi, Kenya.

“Made in China 2.0,” which will premiere at the Paramount Center from Feb. 1-12, straddles “the line between a pop culture lecture and a dramatic performance,” according to press materials. The solo exhibition features experimental director Wang Chong, who recounts his experiences creating theater in China and around the world while emphasizing that stories, not just products, are “made in China.”

Manual Cinema, the innovative Chicago-based performance collective behind previous ArtsEmerson offerings such as “Ada/Ava” and “The End of TV,” brings their version of “Frankenstein” February 22-26 to Paramount Center. Using over 500 puppets as well as live actors and film, this version of Mary Shelley’s classic gothic tale “deals with questions of otherness and belonging and focuses on Mary Shelley herself”, according to Penoi. .

From March 8-12, ArtsEmerson will present a virtual production titled “Cointelshow: A Patriot Act”. Built on documents obtained under the Freedom of Information Act, it is a political satire of an FBI-run domestic counterintelligence program that was deployed against the Black Panther Party, Martin Luther King Jr. .and the Native American movement.

The French director and choreographer Raphaëlle Boitel, behind the dark and bewitching “When Angels Fall”, has teamed up with Julien Couzy for “Shadows Cast”. Scheduled to be at the Paramount Center from March 30 to April 2, the work combines circus, film and dance (“It has a Lynchian, Hitchcockian vibe,” Penoi said) as it examines intergenerational trauma through the lens of the family unit.

When Penoi was named to her role at ArtsEmerson last year, she told The Globe that her Laguna Pueblo and Cherokee heritage had and would inform her approach to theater and the stories she seeks to tell. “And So We Walked,” which Penoi previously worked on as a touring producer, will be ArtsEmerson’s first production to focus on the experience of Indigenous peoples.

Slated for April 26-30 at Paramount Center, “And So We Walked” is actress-activist-writer Cherokee DeLanna Studi’s narrative recreation of the six-week, 900-mile journey she and her father took along of the Trail of Tears, retracing the path taken by his great-great-grandparents during the forced resettlement of the Cherokee people from their homeland in the 1830s.

“It will be a wonderful introduction to how Native history is relevant to every Bostonian,” Penoi said. “It brings the past into the present and challenges us to think about who writes our stories and, really, about what we owe each other.”

The season from May 17 to 23 at the Paramount Center will close with “Nehanda” by nora chipaumire. It is a musical performance that seeks to illuminate Zimbabwe’s liberation struggle by exploring the legend of Nehanda, a powerful ancestral spirit who is revered by the Shona people and believed to be spoken only by female mediums.

“Everything about this piece, while rooted in Zimbabwean history and Nora’s personal story, couldn’t seem more relevant to today’s moment,” Penoi said.

The Tiny Miracles Foundation in Darien is hosting a gala, a car has been donated

Five tips for navigating the federal return to work – MeriTalk