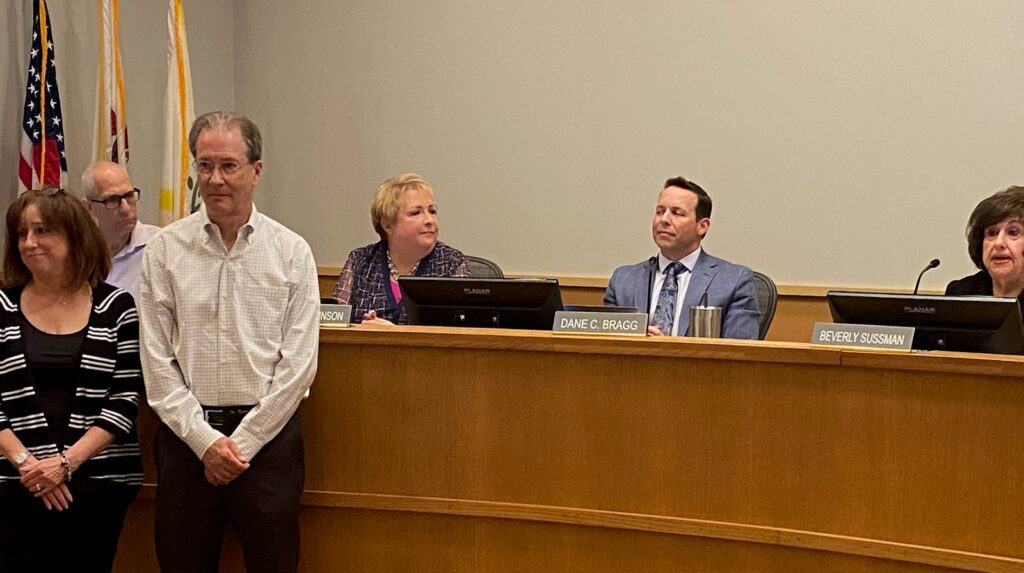 Fritzie Weiss Fritzshall’s family attended the Buffalo Grove Village Board of Directors meeting on July 19 to accept a proclamation in his honor.

On July 19, Trustees for the Village of Buffalo Grove honored longtime resident Fritzie Weiss Fritzshall for her long-standing contribution to the community prior to her recent passing.

In 1944, when Fritzshall was 13, the Nazis forcibly took her, her mother and two brothers from their home in Czechoslovakia and transported them to the Auschwitz-Birkenau concentration camp in Poland.

When she arrived, a prisoner told her that when asked she should say she was 15 years old. Heeding his advice, she aligned with the 15-year-olds and acknowledged that the man’s act of kindness saved her life that day. She worked as a slave laborer in the camp, witnessing and experiencing the acts of hatred of her captors. She has never seen her mother and brothers since they were murdered in Auschwitz.

Through the determination of her will, she escaped into the forest on a death march in 1945 and fled the kidnappers who had taken so much from her – her childhood, her family, her freedom. After being rescued by Soviet forces, she traveled to Chicago and reunited with her father, who had immigrated to the United States before the family’s detention. She became a hairdresser, met and married Norman Fritzshall, a WWII veteran and Japanese POW survivor. She then made her home in Buffalo Grove, bringing her generous, selfless and caring spirit to the community.

The trials she experienced at such a young age propelled her to action. She embraced her difficult past and used her story for good, openly sharing her experiences. She has fought tirelessly against hatred and intolerance while advocating for social justice, working to end the refugee crisis in the United States, and quelling the rise of anti-Semitism.

She founded the Illinois Holocaust Museum and Education Center, of which she was the president from its opening in 2009 until her death on June 19, 2021. For her long-standing efforts to combat prejudice and hatred, she has received the Bertha Honoré Palmer Making History Award for Distinction in Civic Leadership from the Chicago History Museum, the Global Citizenship Hero Award from the Chicago Red Cross and the 2021 Outstanding Community Leader Award from the Chicago Cultural Alliance.

According to village officials, her story contains great pain, but it is a story of resilience, of living in the service of others, of spreading a message of kindness, generosity and tolerance. Officials added that she was an inspiration to many and will be sadly missed by the Buffalo Grove community.

Support local news by subscribing to Journal & Topics in print or online.