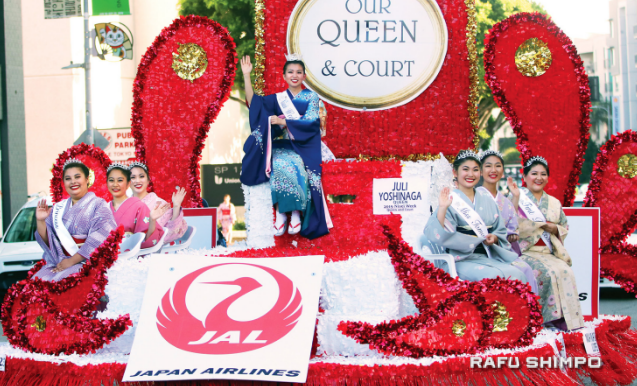 We are back! After two years of virtual experiences, Japan’s Nisei Week festival, enjoyed by thousands over the summer, will take place – in person – from August 13-21.

Come join the downtown Los Angeles community at 80e Nisei Week Japanese Festival, one of the oldest ethnic festivals in the country. The festival features free Japanese cultural events, activities and exhibits, including music and entertainment, food and entertainment over two weekends.

Who will be crowned Queen of the Week Nisei 2022? Find out at the Nisei Week Queen Coronation on Saturday, August 13 at 3 p.m. at the Aratani Theater. (Theater tickets $85, aloha attire.) Additionally, the Nisei Week Car Show will be held on August 13 at the Nishi Hongwanji Buddhist Temple parking lot. Admission is free this year.

Routed through the streets of Little Tokyo, the Grand Parade will kick off at 4 p.m. on Sunday, August 14. The parade will feature traditional Japanese dancers, taiko drummers, Haneto dancers preceded by a Nebuta float, as well as special guests and honorees including Grand Marshal George Sugimoto and Parade Marshals Maia and Alex Shibutani, Olympic medalists from ice skating, and Honorary Parade Marshal Kellyn Acosta, a member of the United States National Soccer Team and Los Angeles FC.

Nisei Week honors individuals and businesses for supporting the Japanese-American community and Little Tokyo. The Awards Dinner on Monday, August 15 at the Double Tree Hotel in Little Tokyo will honor our Grand Marshal, Parade Marshals, and recipients of Community Service Frances K. Hashimoto, President’s Award, and Inspiration Award (to be announced in July). Winners of the Pioneer Spirit Award (to be announced in July) will be honored at a luncheon on August 17 at the Double Tree Hilton. Tickets for both will be available on the Nisei Week website in July.

Plenty of entertainment such as martial arts and activities will be available for the whole family during the Plaza Festival to be held at the Japanese American Community and Cultural Center (JACCC) on Saturday and Sunday. On August 20, experience a Nisei Week culinary event, sponsored by Day-Lee Foods, which will feature local chefs as well as a beer and sake garden. And plan to stick around for Nisei Week Sunset on the Plaza nighttime event for pop-up food vendors, entertainment, and more. Additionally, free cultural exhibits such as bonsai, calligraphy, ikebana, etc. will be presented on both days,

Additionally, the Taiko Gathering will be held at JACCC Plaza on Sunday.

Capping off another year of Nisei Week, Ondo will take place on August 21 at 5 p.m. on First Street in Little Tokyo. The public is invited to join in this Japanese street dance ritual. Nisei week activities will be held at various locations in Little Tokyo, including the JACCC at 244 S. San Pedro St. Pre-Ondo taiko will begin at 4:30 p.m.

For more information, including parking and tickets to paid events, visit www.NiseiWeek.org, call the Nisei Week office at (213) 687-7183 or email [email protected]