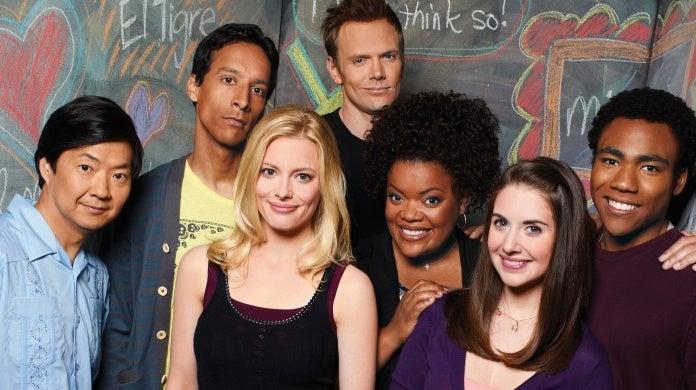 It’s been seven years since the fan-favorite sitcom, Community, came to an end after six seasons, and fans have been clamoring to see a movie ever since the finale. An ongoing joke of the series was to have “six seasons and one movie”, and the cast all expressed interest in returning. Discussions on Community The movie has been going on for years, but the topic saw a resurgence when the series hit Netflix in April 2020, which was followed by the virtual cast reunion. Now, the cast is usually asked about movie updates during interviews. This week, Alison Brie was chatting with Yahoo Entertainmentit is Kevin Polowy about his new movie, spin me aroundand the Community the casting text string appeared.

“Constantly,” Brie shared when asked if the Community the cast is still texting each other. “The text chain is constantly going off. We’ve already sent seven text messages today,” she added with a laugh. “Danny [Pudi] and Ken [Jeong] saw each other at an event last night, so they sent pictures. We are constantly texting each other. This is very cute. I like these guys. I hope we can get together and make the movie. Fingers crossed.” She continued, “There have been conversations, but I really have no idea what’s going on. No updates. Conversations, but no concrete details.” You can watch the interview below:

Alison Brie says she and the community gang are in constant communication and there are still conversations about making a movie. pic.twitter.com/q7LdY4uArd

Earlier this year, ComicBook.com got a chance to chat with Joel McHale about his Super Bowl ad, and the actor revealed he still has high hopes that the Community the movie will happen.

“I will say, I think it’s going to happen,” McHale shared. “Like I used to say, ‘I don’t know.’ We used to say, ‘Sure, a movie could happen.’ But I think more than ever, it’s possible. I mean, I always say, ‘Yeah, sure.’ jaded about it, but I think there’s a much better chance than before.”

Regarding the Community group chat, Yvette Nicole Brown spoke more about the ongoing conversations of the cast last year.

“We have a meeting every morning,” Brown revealed to Variety. “We have a group text that pops up. We randomly joke and laugh with each other. You never know who’s going to start it – it might be a joke someone has or it might be fan art someone has. ‘one got – but we still check every day. The movie? I think it’s coming. I don’t know when, [but] I know we all want to do it and that’s half the battle.”

The six seasons of Community are currently available to stream on Netflix.