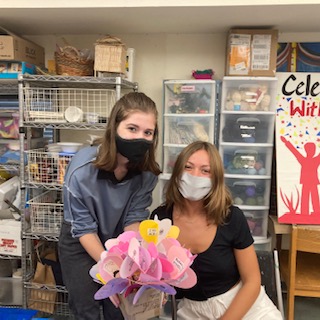 Despite a hiatus in volunteer opportunities during the early stages of COVID-19, St. Francis has remained open to guests – those homeless and homeless or in poverty – every day during the pandemic. Volunteers are now accepted in a limited capacity.

Domek works within the Food Service and Expressive Therapy department, which offers clients the opportunity to come together in the Margaret Stewart Lindsay Art Workshop in St. Francis and create art in various mediums.

“The programs that [St. Francis House] the offers for people facing homelessness and food insecurity are simply unprecedented in the Boston area, ”said Domek. “They’ve really gone to great lengths to help people live beyond the streets. I really respected that and wanted to be a part of facilitating this positive change. ”

After volunteering independently at the shelter, Domek came up with the idea of ​​fostering a bond between Emerson and St. Francis House when she saw the lack of students helping the homeless.

“I felt like there was kind of a missing piece with Emerson College, because it was right down the street, it didn’t make sense to me that there wasn’t more Emerson students signing up to volunteer or just at their various events, ”Domek said. “What really stops people from volunteering isn’t that they don’t want to do it, it’s just that it’s hard to take time out of your schedule to do something like that.” . “

Domek worked with Jenna Coviello, the Student Engagement and Leadership Program Coordinator, to encourage students to volunteer at St. Francis. Coviello wanted to make the idea of ​​Domek part of Emerson’s direction and helped her develop it.

“I presented [my idea] to some of the board’s faculty for guidance, just giving them an overview, ”Domek said. “I really counted on the wonderful guidance leaders. They really helped boost student engagement for the event.

To promote the event, Domek used both word of mouth and social media. She also did an “Instagram Takeover” on the college’s Instagram to advertise the event.

“I had spots open before I took over social media and then after that they filled up immediately,” Domek said. “It made me so happy to be part of a community that is so ready to get involved. [After orientation,] people left with new friends who they could go to the dining room with and friends with whom they can return to St. Francis House and volunteer with them.

Domek said she intended to send a message to Emerson students regarding the importance of volunteering locally.

“For the Emerson community, I hope there is more of a sense of ‘my actions are empowering and they are having an impact’,” Domek said.

Within the shelter, volunteer positions are available in the food service and expressive therapy department, with occasional opportunities to work in the clothing department, which is expected to reopen in mid-fall at full capacity.

Each department offers a unique experience to volunteers. Megan Quinones, the volunteer services coordinator for St. Francis, describes the food service department as a “fast paced” environment. Volunteers interact with many people in a particular time frame while serving guests the daily meals offered at the shelter.

Savor, a visual media arts major, volunteered in the foodservice department and described the experience as rewarding and a reality check.

“[This allows us to] watch our beliefs and make sure we always think of each person we meet first as an individual as opposed to someone separate from us, ”said Savor. “We are so privileged to live the life we ​​lead, so why don’t we take a few hours out of our week to help others? ”

The expressive therapy service has a capacity of six people at a time, Quinones said.

“Most of the time, [guests] want to come in for that one-on-one connection with our amazing art therapist, Gurleen [Anand], “she said.” We love to plug our volunteers into this space and just see the relationships that can develop between them and our guests. ”

Redding, a marketing communications major who volunteered in the expressive therapy department, said she was inclined to get involved in not only the community of Emerson but also the community of Greater Boston.

While helping cut out paper hearts for arts and crafts, Redding had the opportunity to interact closely with some of the guests.

“We made art, we talked to them and we really learned about their life,” Redding said. “I really want to fit in going there at least once a week. It was a fulfilling experience and I felt really good giving back so close to where we are.

“Right now there’s a lot of sorting and organizing because we’re aiming to reopen our clothing department in mid-fall to the capacity where it was operating before COVID-19,” Quinones said.

“When this space reopens, it will be almost like a store experience for our customers where volunteers help them,” she continued. “Customers can find clothes that match their style instead of what we assume they want to wear. “

Collier, a theater and performance major, volunteered in the clothing department, where she sorted and organized the clothes that guests could choose from.

“I felt it was my job as a US citizen to give back to the community,” Collier said.

Quinones hopes to increase the volunteer capacity in St. Francis and implement more community service opportunities. She is passionate about helping homeless people and providing people with the one-on-one support they need.

“The volunteer services at St. Francis House really exist in a way that supports and uplifts the various volunteer locations we have throughout our day shelter,” Quinones said.

Collier emphasized the importance of the shelter volunteer program and services that provide clients with an outlet and a distraction from everything that happens during their day.

“He just provides [the guests] with the necessities they need to keep going throughout the day or week, ”Collier said. “I got such a rewarding experience and learned so much from the people around me and the hard work they do, so I would definitely help again.”

While volunteering, Quinones emphasized the importance of treating guests with dignity.

“[St. Francis House] acts as a space of refuge for those who are not only homeless or homeless, but also for those who have a low income or who need any of the services we provide, ”said Quinones.

Danita Clark, a guest of St. Francis House since 2000, said she periodically visits the expressive therapy department. Clark is also involved in Boston Common Art, a weekly program offered by Common Cathedral, providing a space for homeless people to develop their artistic skills during gatherings at Emmanuel Church on Newbury Street.

Clark received a bachelor’s degree in architecture in Texas and majored in art involving buildings. With the support of his peers, Clark was able to pass his classes and develop his drawing skills. Now she enjoys cultivating new ideas with the flexible hours offered by St. Francis House.

“I had to work hard to improve myself and keep pace with the other students,” Clark said. “I was good at math and English. [Now,] I have a lot of ideas to implement.

Another guest from Expressive Therapy, Wedel Michael Tuquabo, has been visiting St. Francis House for about four months.

He says he particularly enjoys drawing and coloring but tries to do everything. Tuquabo’s concentration and dedication encourage him to work on his art for up to three hours in a row. Much of his current work is on the Halloween theme, which the shelter plans to use as Halloween decor.

“When I start, I have to finish,” said Tuquabo

Quinones and Domek love to help others serve in their community and support St. Francis House’s mission to provide for those in need of their services.

Domek sees the importance of volunteering at the local level as it has a ripple effect in the community at large.

Domek plans to host another volunteer event at Maison St. Francis for orientation next year, while also working to host a similar event in cooperation with Best Friends at Emerson College—A club that works to support members of the intellectual and developmental disability community — during this school year.

East St. Louis athlete will be remembered at annual parade