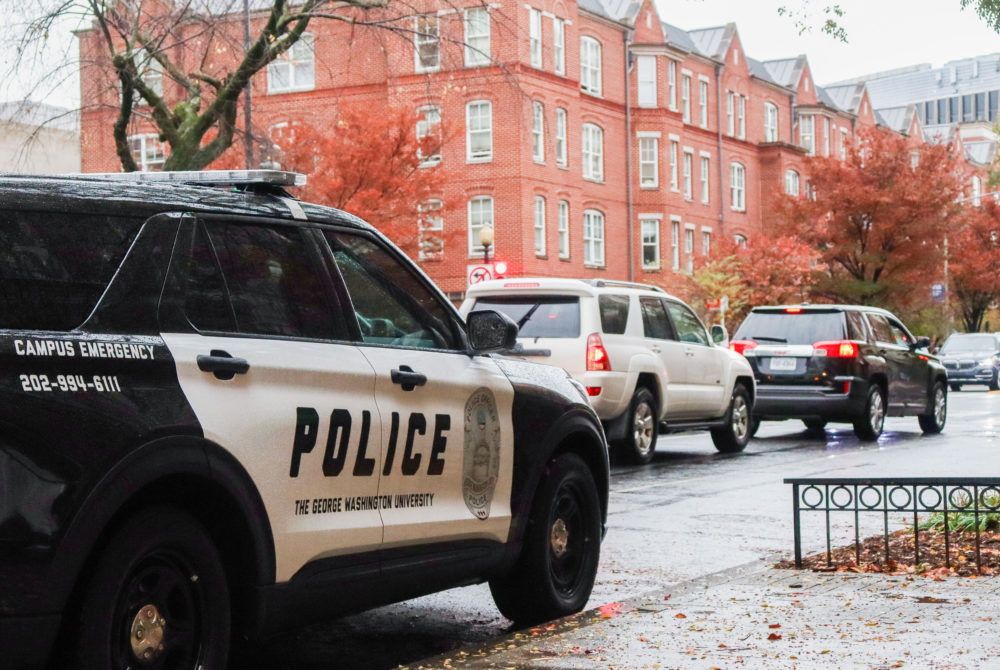 GWPD spear the school year in September with Raise High with GWPD, an event at University Yard where officers handed out student food like free Chick-fil-A and brochures about the department, before unveiling Coffee with the chef, where students can discuss campus issues each month one-on-one with Tate via Webex. More than 10 students said the department’s high community engagement efforts signaled increased transparency from the department, drawing marked differences from a period of limited trust between GWPD and students prior to Tate. come to the department in 2020.

“The way to determine if outreach efforts are effective is to listen to students,” Tate said in an email. “We need to connect with students and listen to their feedback. So far, the feedback we have received has been positive. The students shared that what we are doing is “refreshing” and “new”. »

Tate said community outreach has been a “priority” for the department to reform the image of GWPD on campus since he assumed management at the start of 2020 of a department whose management had previously hanged in question among fracture student relations. Four months after joining GW, Tate called that of the department “woefully inadequate” officer training with minimal de-escalation preparation for officers.

BSU published a letter in June 2020 with eight other student organizations to pressure GWPD to rebuild trust with the GW community through non-tolerance policies for instances of racial bias and a weaker presence on campus in light of a raise critical against the police following the Black Lives Matter protests. The letter also arrived months after GWPD put an off-duty officer who seemed to push a student descending a series of steps during a protest for climate justice.

Tate said officers listened to students through discussion opportunities and events as part of their outreach. He said more students engaged in GWPD events and approached the department to file incident reports than in previous years – an “encouraging” sign of comfort and familiarity with the department.

Tate said the department organized Raise High with GWPD for the first time this year in September so community members can converse with officers in a “non-police capacity,” and he plans to make the event annual at Mount Vernon and Foggy campuses. Bottom. BSU and Fraternity and Sorority Life collaborated with GWPD to organize the event, and Tate said the department plans to collaborate with “various campus departments” and District Connections for future outreach events.

“During our community outreach event on U-Yard, student leaders from FSL and BSU volunteered to work alongside our officers at each station, greeting the community and helping to build camaraderie, especially with freshmen,” Tate said. “I have worked in several institutions and I have never seen anything like it.”

GWPD has also introduced Coffee with the Chief this school year, which takes place on the third Thursday of every month where Tate meets with students who can register a week in advance for 15-minute chat blocks over a two-day window. hours. Students can discuss public safety issues and potential community-building events and partnerships, depending on the University’s curriculum. website.

Students said GWPD’s newly introduced campus outreach events helped familiarize and build trust between Tate, officers and the GW community. Some said the department could continue to strengthen its publicity efforts by focusing on ongoing safety initiatives with more emails and press releases to announce department updates, including those regarding events on the campus.

Gianna Cook – an English major and president of BSU, who was also a member of the administration that sent the letter condemning GWPD in 2020 – said GWPD has “evolved” significantly over the past two years. She said that before Tate came to campus, GWPD was not helpful to community members due to their lack of familiarity with students, but now she said officers are doing their best. to welcome students, attend organization events, and provide opportunities for students to speak with them about politics.

“He requires his officers to engage with students on a personal level because he cares about our general well-being in addition to our safety,” Cook said.

Cook said that while BSU and GWPD don’t currently have any plans for an event in the near future, she wants the partnership between the groups to be “ongoing” because BSU represents underrepresented minority groups. She said the partnership is “very beneficial” and helps black students feel more comfortable with GWPD’s presence on campus.

“I think it helps with the representation aspect of knowing that our voices matter,” Cook said. “Hopefully in the next two months and even years after that, this partnership is still the mindset instead of the us versus them mindset that it might have been in the past.”

Michael Graham-Green, a senior political science major, attended Raise High with GWPD at U-Yard last month and said the event demonstrated a willingness from officers to connect with students.

“It’s definitely better than no outreach at all,” Graham-Green said. “I don’t know if it really made me more likely to interact with GWPD in the future, but it was better than just locking them in that building over there and not having any interaction.”

“That was probably the best way they could have gone about it to be honest with you,” Graham-Green said. “I don’t know if it will necessarily make a lasting difference, but I think it’s the best way to do it.”

Dinorah Martell, an international business graduate, said GWPD could promote lesser-known events initiatives like its security app more effectively through increased publicity to better educate the GW community on their resources. She said the continued promotion of the GW Guardian applicationwhich allows students to be notified if their friends do not arrive home on time, could contribute to awareness-raising efforts.

“GW can do more to release these kind of apps instead of GWPD because I hear more from GW than from GWPD,” she said.

This article appeared in the Issue of November 14, 2022 of the Hatchet.