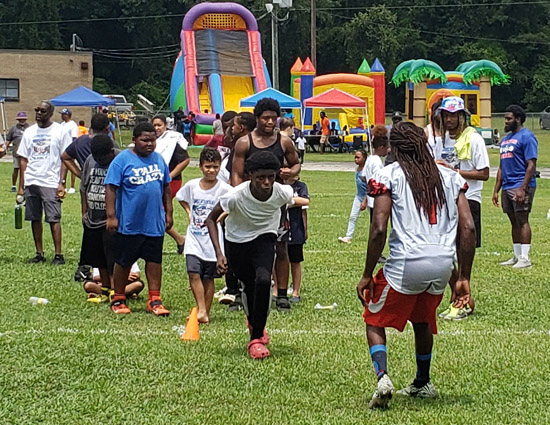 Al “Boogie” Lewis blasted music from his speakers near the scoreboard on the football field at Elizabethtown Middle School on Saturday afternoon.

The youngsters slid down inflatable slides and, thanks to the nightly rain that accumulated in the bottom, splashed until they stopped.

Along the roughly 10-yard line, Tennessee Titans defensive lineman Larrell Murchison was looking for open receivers and throwing passes during what was supposed to be a two-handed 7-on-7 game, but looked more like to a game of 15 against. -15. Elsewhere on the pitch, children were put through agility drills or running passing patterns.

Hundreds of people turned out for Murchison’s second day of community entertainment. The East Bladen High and NC State graduate was right in the middle of it all, posing for photos, shaking hands, taking videos with his phone and organizing activities.

For Murchison, now 25 and preparing for his third season in the NFL, it’s a way to give back to the community where he grew up and where his parents, Glenda and Milton Murchison, still reside.

“I’m just doing this because when we were that age, me and my twin brother (Ferrell), we were always looking for football players in the community that we looked up to,” Murchison said. “Since I’ve grown up now and I’m lucky to be where I am, I want to show them an example like the guys I watched showed me. I just want to come back and bless and show that you can get by no matter where you come from.

There was also a car show, lots of vendors, delicious food, and plenty of water to drink on a typical hot, humid July afternoon in Bladen County.

In short, it was a fun summer day for many Bladen County boys and girls, which is why Larrell Murchison staged it.