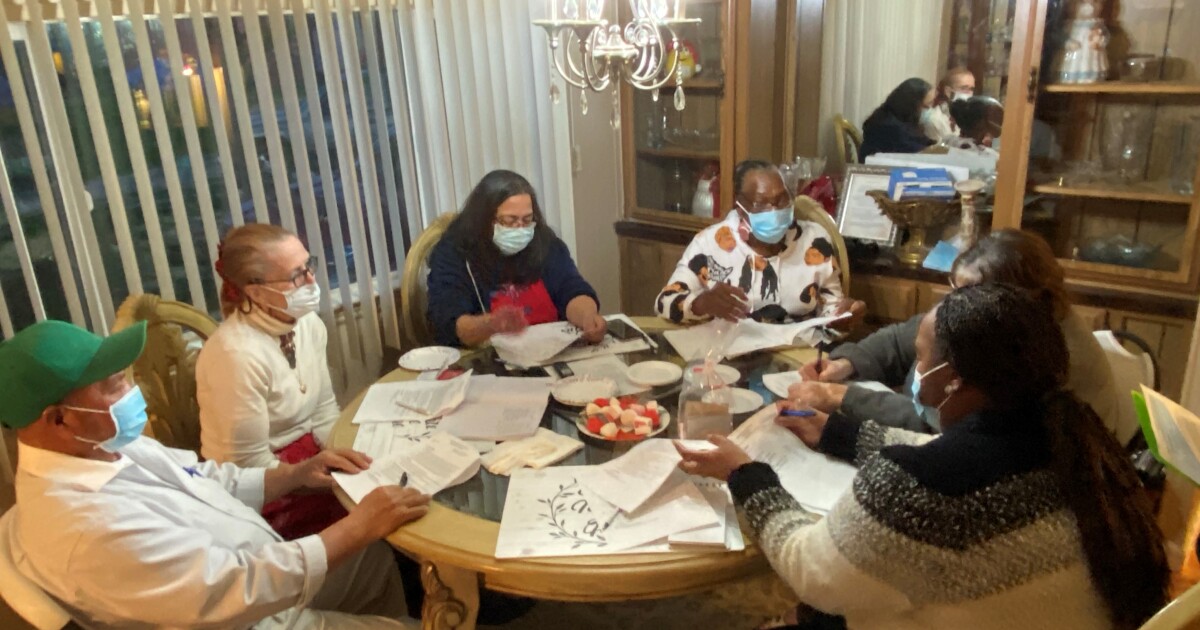 In Madera County, the Fairmead community and friends cling to the community’s past while advocating for its future

This story originally appeared on The Other California podcast which you can find here.

Inside Barbara Nelson’s home, about 10 people gathered on Valentine’s Day for the monthly board meeting of Fairmead Community and Friends, a nonprofit advocacy group Nelson co-founded with Vickie Ortiz and Elaine Moore.

It’s not a big crowd, but more than enough to fill Nelson’s little house. It feels more like a potluck than a board meeting of people trying to improve their community. The eclectic group – young, old, black, white, Latino – have the easy rapport of old friends.

Because Fairmead is classified as a census-designated place, there is no mayor or town council. Instead, there’s Barbara, Vickie, and Elaine. These women are the voices of the approximately 1,100 people who call Fairmead home. Elaine Moore, who is married to a longtime almond farmer, describes it as community service rooted in friendship.

“You know where to go for help. And you don’t even really have to beg. All you have to do is let them know you need help. And here we are,” Moore says. “Whether it’s a disaster or whether it’s a happy time and we’re going to celebrate. It’s just camaraderie. It’s true friendship. It doesn’t matter what color your skin is or what language you speak.

Michael Eissinger, historian and cultural anthropologist who wrote the book “Fairmead: A Century of Change,” says these three women have become the soul and face of Fairmead. “The main and most important goal of these three ladies was to try to build a community. They didn’t care about politics or anything else.

But to understand Fairmead today, it helps to start at the beginning. Because as Eissinger writes in his book, “the story of Fairmead is both unique and emblematic”.

By the early 1900s, large corporations based in Los Angeles and San Francisco owned much of the farmland in the San Joaquin Valley. And in an effort to make a profit, a movement has emerged among these companies to develop small towns, called settlements, and sell the plots to family farmers. In the case of Fairmead, the plots were marketed to Mennonite families in Germany and Russia on the promise of abundant sunshine, fertile soil and abundant water.

In its early days, Fairmead’s future was as bright as any community in California, according to Eissinger. But ultimately, the water kept him from reaching his potential.

Fairmead has no lake and no rivers flow through the town. Thus, all this abundant water promised to these European settlers had to be pumped from the ground. Which worked well at first, but by the 1920s farmers had to dig their wells hundreds of feet into the Earth to suck up the rapidly shrinking aquifer.

“And they got to a point where most of the white people that live there said ‘to hell with that’ and they bailed out. We had a huge white flight. Chowchilla was under construction just north of it, it started just a few years after Fairmead, but there was water, so all the whites went from Fairmead to Chowchilla,” says Eissinger.

This is where Fairmead’s fate took a turn. With the disappearance of the white population, along with much of the groundwater, property values ​​plummeted. But a speculator named Jacob Yakel saw an opportunity. He bought most of Fairmead and sold the plots directly to black farmers.

At that time, most communities used housing covenants to prevent black people, as well as many other ethnic groups, from buying property. But, according to Eissinger, Fairmead meant that black people could own their own farms and establish their own community.

So it happened that on this dry, dusty land a few miles south of Chowchilla, a thriving black enclave was built. From the 1920s through the 1960s, Fairmead remained predominantly black, home to families like Barbara Nelson’s.

“A lot of black people started moving here, buying property,” Nelson said. “And the cotton was there. People picked cotton, I grew up picking cotton, cutting grapes. Because I tell my kids now that we were the farm workers, the African Americans, we worked here.

But things began to change in Fairmead after the passage of the Civil Rights Act of 1965 when Fairmead’s population began to shift from predominantly black to predominantly Hispanic, according to Eissinger.

“In 1965, Chowchilla had to allow its first blacks to settle. And so people had options, whereas now these poor communities are absorbing new people and they have the same issues of water and isolation and food deserts that those communities before have struggled,” says -he.

Barbara Nelson was not there for the population shift that Eissinger just described. She and her husband Clyde left the Valley in the mid-1960s and made the Bay Area their home for about 40 years. But after Clyde retired, they decided to return to Fairmead to care for their aging parents. And when they arrived, she was shocked by what she found.

“When I came back to Fairmead in 2005 and there was no store, Fairmead was just pitiful. I didn’t see any change,” Nelson says. “And I said, I have to make a difference . I’m here, so I met another resident and we started talking about it and we started this group.

Over the years, Fairmead Community and Friends have achieved a great deal through their advocacy. When the community’s only well ran dry, they helped secure federal grants to rebuild the water system. Then, when the high-speed train announced the tracks would cross Fairmead, they successfully fought to keep the community together.

The group is also doing what they can to hold on to Fairmead’s past. As one of the only residents of Fairmead to remember when it was an almost all-black settlement, Barbara Nelson says she feels compelled to preserve that history.

“I think it’s important to show that we were here, that we planted the cotton and that we did our part here to make Fairmead what it was too. We never want to forget that,” Nelson says.

For agents, consumer messaging apps are insecure and illegal

Connecting youth in the community to the outdoors