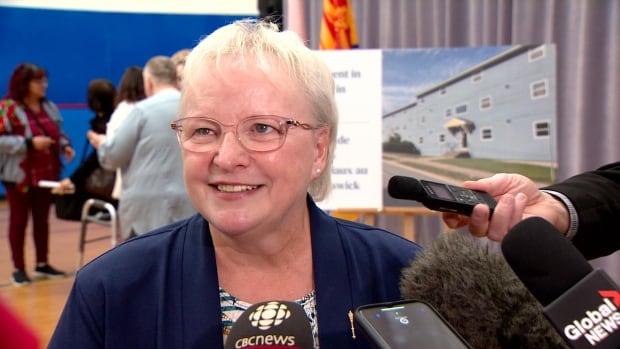 The Government of New Brunswick is using part of its budget surplus to create 380 new social housing units over the next four years.

The $102.2 million project will also include “immediate renovations” to 110 units that have stood empty, Social Development Minister Dorothy Shephard said Monday during an announcement in Saint John.

Shephard said there will be 120 new housing units split evenly between Saint John, Fredericton and Moncton, with another 68 units in northern New Brunswick. 192 additional units will be created in areas where the needs are greatest, both in rural and urban areas.

“Significant increases in the cost of living, combined with a boom in the housing market, have contributed to unprecedented demand for social housing,” Shephard said.

She said it is the first construction project in 38 years for government-owned housing.

While not a “silver bullet”, Shephard said the project represents “a big step forward” in solving what she has acknowledged is a housing crisis.

“I don’t know how we can’t say there’s a crisis,” Shephard said.

She said the waiting list to get into social housing stood at around 8,700, including 3,700 people of working age.

“So today was a step in the right direction,” he said.

Hatfield listed a “perfect storm” of contributing factors to the province’s housing crisis that included “until recently lagging provincial investments.”

“But today’s announcement addresses that last point in an important way. This is a huge commitment to the file. It will have a demonstrable impact on the number of affordable housing units in the province.”

Hatfield said a big part of a person’s life depends on the security of having a place to live.

The average age of buildings is 52 years

The Department of Social Development owns and operates 808 social housing buildings across the province, representing about 3,800 units, according to a government press release. “Most of these units were built in the 1970s, with an average age of 52.”

Shephard acknowledged that “there has not been a major social housing renovation and replacement plan for decades, which has contributed to the current poor state of infrastructure”.

She said $2.2 million of the money will be used “to ensure that 110 of the vacant units can be occupied as quickly as possible.”

While some need new windows, doors or fixtures, others, due to the age of the units, require upgrades to electrical or plumbing systems, Shephard said.

She said she was confident renovations to the 110 currently “uninhabitable” units will be complete by the end of March.

Shephard said she grew up in poverty and knows what it’s like to struggle. Growing up in Saint John’s Dominion Park on Sawdust Road, her family didn’t have indoor plumbing until she was 12 years old.

“For me, it’s personal. I understand that everyone needs a helping hand at some point.”

It’s also personal for Juanita Black. The community activist spoke about her experience with social housing – over 40 years, in fact.

Adding new units” will reduce the waiting list, it will reduce people’s anxiety about not having a decent place to live. Because if you don’t get up in the morning after a good night’s sleep, you won’t ‘re not ready for the rest of the day.”

“One thing I’m hoping…is that when they build these new units, they put them in a place that’s not too far from here by itself – it goes, ‘Oh, he there’s these people’, you know. Put them right in the middle of [neighbourhoods] and let them all work together,” Black said.

Shephard said location details have yet to be worked out, but she said the government wants to create “inclusive communities”, so it will work with municipalities to determine where to place the new units.

She said it’s also too early to tell whether the units will be high-density apartments or single units, but she hopes construction will begin in April.

Jessica Wright is one of 8,700 New Brunswickers waiting for social housing.

The 32-year-old has spent more than a year and a half on the waiting list, hoping to be placed in accessible housing in Saint John or receive a supplement to help pay her rent.

Wright signed up shortly after suffering two aneurysms on the right side of her brain, affecting her balance and mobility, among other challenges.

“I went from, I would say, a normal, healthy physical person at 30, to a very disabled person,” Wright said.

With no time to get to the top of the list, Wright finds herself in an apartment that she feels doesn’t meet her accessibility needs and costs more than she can afford.

Others are in preparation

Shephard said the government also hopes to do more for “the working poor” and middle-income people. She said that 45% of people in Saint John, for example, are renters.

So, in addition to the nearly 500 additional units announced on Monday – 380 new units and 110 refurbished units – Shephard said the government had “exceeded our target for new affordable housing created by the private and not-for-profit sectors over the past three last years.

“We have reached 177 new units, and we are now working to see an additional 405 new affordable units come to market over the next three years, in addition to new social housing.”