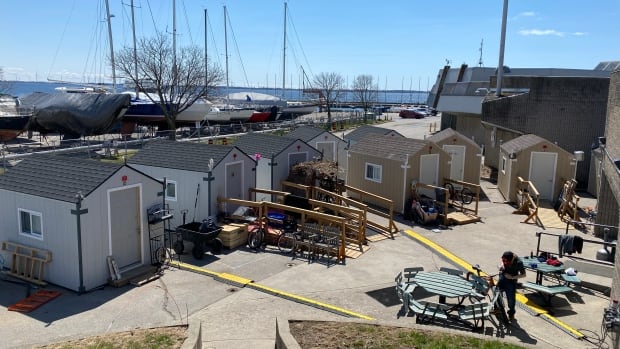 The city of Kingston has an expensive storage problem – what to do with 10 tiny “cabins” used to house a dozen homeless people for a single winter season.

According to an interim report on Tuesday, the city has contacted a “wide variety of community partners” to seek a new site for the cabins, which have no bathrooms or running water but so far no takers.

“They are playing with our lives”

Barry Shea, one of 10 residents of the cabins, says the city’s uncertainty is frustrating.

“To start all these cubicles like they did and then take them away…that’s something I don’t understand,” said Shea, a 57-year-old retired PSW. “They are playing with our lives.”

As a wheelchair user, Shea said traditional shelters were not accessible to her. He fears that if the sleeping cabin project ends, he could end up on the streets.

He credits the cabins with saving his life. “I lost 10 friends on the streets this winter… I almost froze to death.”

Shea said he didn’t understand why there were no permanent solutions on the table.

Critics of the pilot project, which was run by a nonprofit group called Our Livable Solutions, say it’s a poor use of taxpayers’ money and donations, and that the money could have been better spent on shelter beds or permanent accommodation.

“We’re basically paying market rent for these cabins,” Coun said. Peter Stroud, who had voted against the project from the start. “Why don’t we just put them in apartments then?”

Project presented as an innovative solution

The project received approval from Kingston City Council in October and the cabins were unveiled three months later at Portsmouth Olympic Harbor to much fanfare.

By mid-January, residents had moved into the cabins.

At the time, it was touted as an innovative solution to the city’s chronic homelessness problem.

The council budgeted $407,000 for the program, and a local woman then donated an additional $100,000 to United Way to cover the cost of the town buying the cabins.

Those remaining funds will be used to help former cabin tenants through the transition, which includes motel options, according to the interim report.

Keeping the cabins at Portsmouth Olympic Harbor is not an option, as the Canadian Olympic Training Regatta Kingston (CORK) needs the venue for its annual summer sailing festival.

The brainchild behind Our Livable Solutions, Chrystal Wilson, said she was concerned about participants ending up on the streets.

“We’ve been able to stabilize people who otherwise haven’t committed to traditional supportive housing,” she told council on Tuesday. “They would end up backing off when they left.”

Stroud was one of five city councilors who voted against the project. He said that while supports for homeless people were badly needed, he believed the small shack project was doomed.

“We kind of just accepted the offer. It was the only offer we had to say yes or no,” he said, adding that he felt it was not a good idea to fund something that only lasted four months.

“We need more social housing and it needs to be bigger than a few shacks,” Stroud said. “We all need to work together for better permanent solutions.”

The cabins have drawn mixed reviews from Kingston’s homeless population, advocates and experts.

The limited space and capacity of each cabin also meant that only about ten people were accommodated at a time.

Others point to security issues as another downside.

WATCH | Sleeping cabins not a good use of funding, critic says

Joanne Borris of the City of Kingston says the sleeping cabins provide some stability for homeless people as officials try to help people with different needs and challenges. 0:52

“There’s a reason we have laws about the conditions that must be provided in a housing unit,” Marshall said, referring to the project’s exemption from certain aspects of Ontario’s building code.

Marshall said that despite the good intentions behind the sleeping cabin programs, she worries about their safety and effectiveness. Unplumbed buildings under 10 square meters are generally exempt from Ontario’s building code.

Not just a question of money

The Kingston Housing Administrator said it was not just about the money.

“There are a lot of barriers for people who are homeless or have been chronically homeless,” Joanne Borris said. “That unfortunately doesn’t make it as easy as it could be for you and me to go out and talk to a landlord and get an apartment and then be able to maintain and keep that apartment.”

One of 13 different people who stayed in the cabins now has permanent accommodation and one has found gainful employment, according to Borris.

Sleeping cabins not a good use of funding, critic says

Professor and researcher Carrie Anne Marshall says the money should be spent on a permanent solution to help the homeless and not an experimental solution that escapes important housing laws. 0:48

She said the program has been helpful even though the majority of participants have yet to find stable employment or housing.

“It’s a community environment for these people where they learn life skills and supports as they move around. [through their] journey to housing,” said Borris, adding that the program also helped participants prepare for employment.

The city is keeping the cabins at their current site until May 17 in hopes of buying time to find a permanent location.