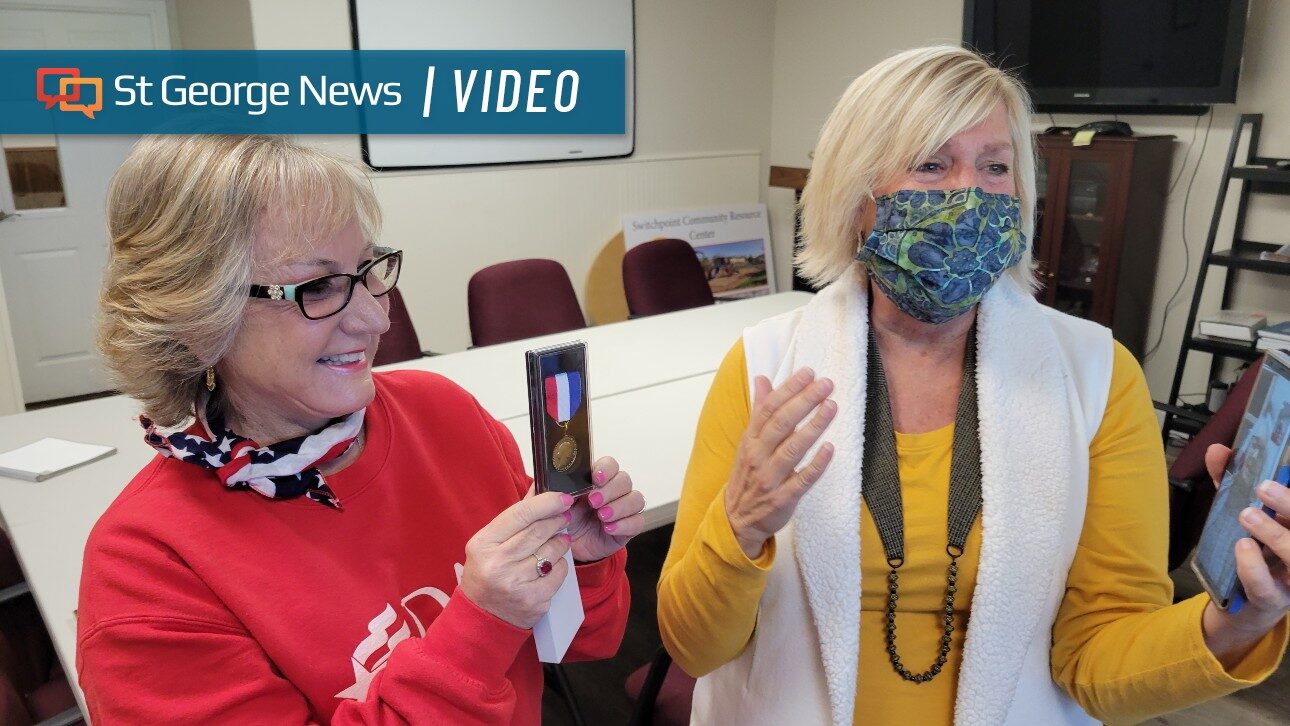 ST. GEORGE – In a pandemic year of Zoom meetings and physical distancing that made it more difficult to accomplish their work of helping people experiencing poverty, it was fitting that Executive Director Carol Hollowell had to accept the award at distance when Switchpoint and her leader were honored by the Color County Chapter of the Daughters of the American Revolution (DAR) on Thursday.

Switchpoint received the Chapter’s Community Service Award, while, surprisingly, Hollowell didn’t expect her to receive an honor from Women in American History.

Hollowell was unable to hold the certificates or get pinned with the medal adorned in red, white and blue during the ceremony at the Switchpoint offices in St. George. But her face was still beaming from a cell phone held by Switchpoint’s director of development, Linda Stay.

The executive director has spent the week in the Salt Lake City area, spending long hours culminating in a fundraising effort to convert a hotel to house the elderly in poverty. And she couldn’t escape Thursday as she reached out and asked for more funds technology CEOs at Silicon Slopes Summit.

But from a distance, she felt the accolades as an affirmation of Switchpoint’s work.

â€œI think it’s important that my team feel recognized. Sometimes you feel like people notice it, especially after a hard year and a half of COVID, but they need that recognition of, ‘Hey, people appreciate that it’s hard,’ â€Hollowell said. â€œSometimes it’s chaotic and traumatic work. So yes, that means a lot.

Valerie King, DAR Color County Chapter Regent, said one of the reasons Switchpoint was honored was the ability to help people experiencing poverty locally despite roadblocks for the past year and a half. Even though technology like remote meetings that would seem magical to the Founding Fathers played a role, King said Switchpoint and Hollowell personified the revolutionary spirit of 1776.

â€œI think we’ve all had to find new and inventive or innovative ways to come together and continue to support mission fields. Some of us have had to go to Zoom meetings and find different ways to deliver services while limiting personal contact, â€King said. ” We are American. We understand it and make it happen.

King added that it was not difficult for the Color County Chapter to arrive at Switchpoint as this year’s winner.

â€œIt wasn’t hard to figure out because we knew the challenges Carol and her group had had over the past year. And we’ve tried to help meet those challenges, â€King said. â€œWe knew that despite everything they were going to persevere. “

Back in St. George, Hollowell received the awards on Friday and King returned to the Switchpoint Community Resource Center to pin the medal on Hollowell.

While Hollowell, who co-founded the nonprofit in 2014, knew DAR would honor her organization, being named a Woman in American History came as a total surprise.

Along with the medal and certificate, Hollowell’s likeness and 100 words about her will now become an integral part of the National Society of the Girls of the American Revolution database in Washington DC.

“How could you not recognize Carol for all she has done in our community?” Especially since it dates back to 2014, it’s not something new, â€King said. â€œShe’s been supporting this for quite some time and continues to make it grow and meet the difficult needs of helping those who need a meal or a place to stay,â€ King said of Hollowell. “She gives heart and I couldn’t think of a more deserving person to be rewarded for it all.”

Turns out, even through a phone screen, Hollowell could feel the love. And while she’s no stranger to being honored for her work, even globally, she said there was something more special about being recognized by the DAR team.

â€œThey have come and have been such a big part of our volunteer group and are thinking with their hearts,â€ Hollowell said. â€œIt means a lot when you are honored by your friends. That’s what makes it really special, it’s not just an honor from an unknown entity. It is much more significant.

Chris Reed is editor and weekend reporter for St. George News. He regularly moved east after growing up among girls in the San Fernando Valley in Southern California. He graduated from Cal State Northridge before spending a decade in Las Vegas. As a sports journalist and editor, he has previously compared shoe sizes with Shaq. As a journalist and editor, he has covered parades, triumphs and tragedies. He also once got close to the stars while advertising a space module builder. He came to St. George out of love and learned to love the community. He is the proud father of two boys, his youngest being a champion against autism and type 1 diabetes.