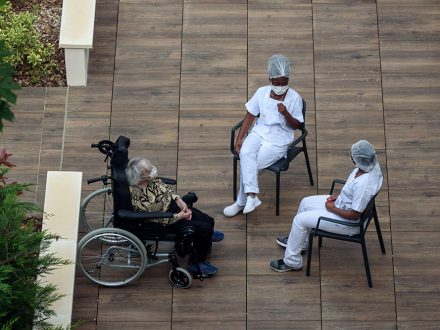 The government still does not have a social protection plan

“We expect demographic pressures and unit costs to be met through municipal tax, social protection precepts and long-term efficiency gains.”

This line sums up the feeling that Building back better: our plan for health and social services, released yesterday by the government, is built at least in part on wishful thinking and stops ahead of a big plan to end welfare’s financial woes.

The relentless increases in housing taxes, coupled with precepts of social protection, are sticky plasters, not bold new ideas – not even lasting and incremental. The idea that there are other possibilities for long-term effectiveness in our current system (the common word is significant) is of course fanciful.

Yesterday’s announcement had long been viewed as a social protection plan. However, of the Â£ 36bn generated by the 1.25 percentage point increase in national insurance contributions over the next three years, only Â£ 5.4bn goes to UK welfare.

And, of the welfare gain, nearly half is swallowed up to prevent some welfare recipients – the wealthiest – from having to sell their homes to finance child care costs. While this is, of course, welcome for some, it is not money for the welfare system per se.

Meanwhile, the stipulation that people who fund care themselves will have access to the same cost rates as counseling means that they no longer subsidize those who receive care funded by the counseling. Fairness for the self-funders is clearly desirable – but the reason the councils were getting extremely low rates over the self-funders isn’t because they are vile organizations that like to hammer their local people. It’s that their perpetual funding crisis means they have no choice but to cut costs. The end of cross-subsidization will increase the cost of counseling care, further eroding additional funding.

So, with all of this in mind, there simply isn’t enough extra money left to even partially solve the most basic welfare problems.

As Labor leader Keir Starmer noted in the House of Commons, the Prime Minister has not described anything to help low wages in social services, or offer a plan for adults with disabilities.

Surprisingly, the Prime Minister’s statement in the Commons literally didn’t mention the 1.5 million social workers. It’s hard to imagine a more compelling way to ‘level’ the country than to raise wages for this undervalued, forgotten and devoted section of society. While Â£ 500million has been announced over three years to support the workforce, that comes down to Â£ 111 per year per worker – hardly a game-changer, and at the same time, of course, they will each be personally affected financially by the increase in national insurance. .

As the government resorts to the absurdity that an aging population and ensures that healthcare providers get a good return on their investment can be corrected through municipal taxes, precepts and efficiency gains, the announcement of yesterday failed to cope with the most basic problems of social services.

Indeed, the status of social assistance has diminished further. Boris Johnson has long insisted he had a welfare plan – but when he arrived it was a repeat of centuries-old history: welfare took a back seat to the NHS. A national insurance levy supposedly for social care will in fact go overwhelmingly to the health service. Yesterday further adds to the feeling that social care remains forever in the shadow of the NHS, its most politically powerful sister, rather than being cherished in its own right.

As the Institute of tax studies created today, the NHS has an insatiable appetite for additional funding. It’s hard to believe that at the end of the three years the levy will somehow go to welfare instead. Worryingly, Health Secretary Sajid Javid would not be drawn to the amount of social care that the following years would receive.

Tips were hardly mentioned either. They may know how many National Insurance contributions they will receive for a few more years, but they – and social services, their single largest service – are still at the mercy of Rishi Sunak’s spending review of the 27th. October. Any further austerity, which is surely likely, will hammer social assistance even more.

Social protection must be rethought. It must become a more forward-looking preventive service, rather than a service of last resort for those who need it most. To adopt this forward-looking position, he needs a lot of additional resources, with time and space for his practitioners to place much more emphasis on maintaining well-being. A culture of 15-minute home visits and private equity giants treating residential care as a way to profit from the real estate market needs to be urgently addressed.

In a Daily Mirror article yesterday Barking & Dagenham LBC Managing Director Chris Naylor (teaser question: Can someone name the latest board managing director to write for the Mirror?) Treatment “.

He noted how his own council’s services sought to find the root cause of residents’ problems – such as debt problems – and then worked with them to “change their lives”, rather than just helping them in cases. crisis.

Although, LGC might add, you cannot necessarily get around severe disability or the impact of aging, you can take a new approach with the priority being to focus on people’s well-being, quality of life and quality of life. ability to choose their own care, rather than limiting support to those who have reached crisis. In purely financial terms, while such an approach comes with additional costs, it also has the potential to save money.

There was no suggestion yesterday of a new new thought, and certainly no significant resources to pay for it.

We learned that there will be a white paper on social care later this year, focusing on the choice, control and independence of care users; exceptional quality of care; and fair and accessible care for those in need. A lot of weight is now placed on this document. But it’s hard to see how those priorities can be achieved as yesterday’s funding announcement suggests social care will remain a Cinderella service.