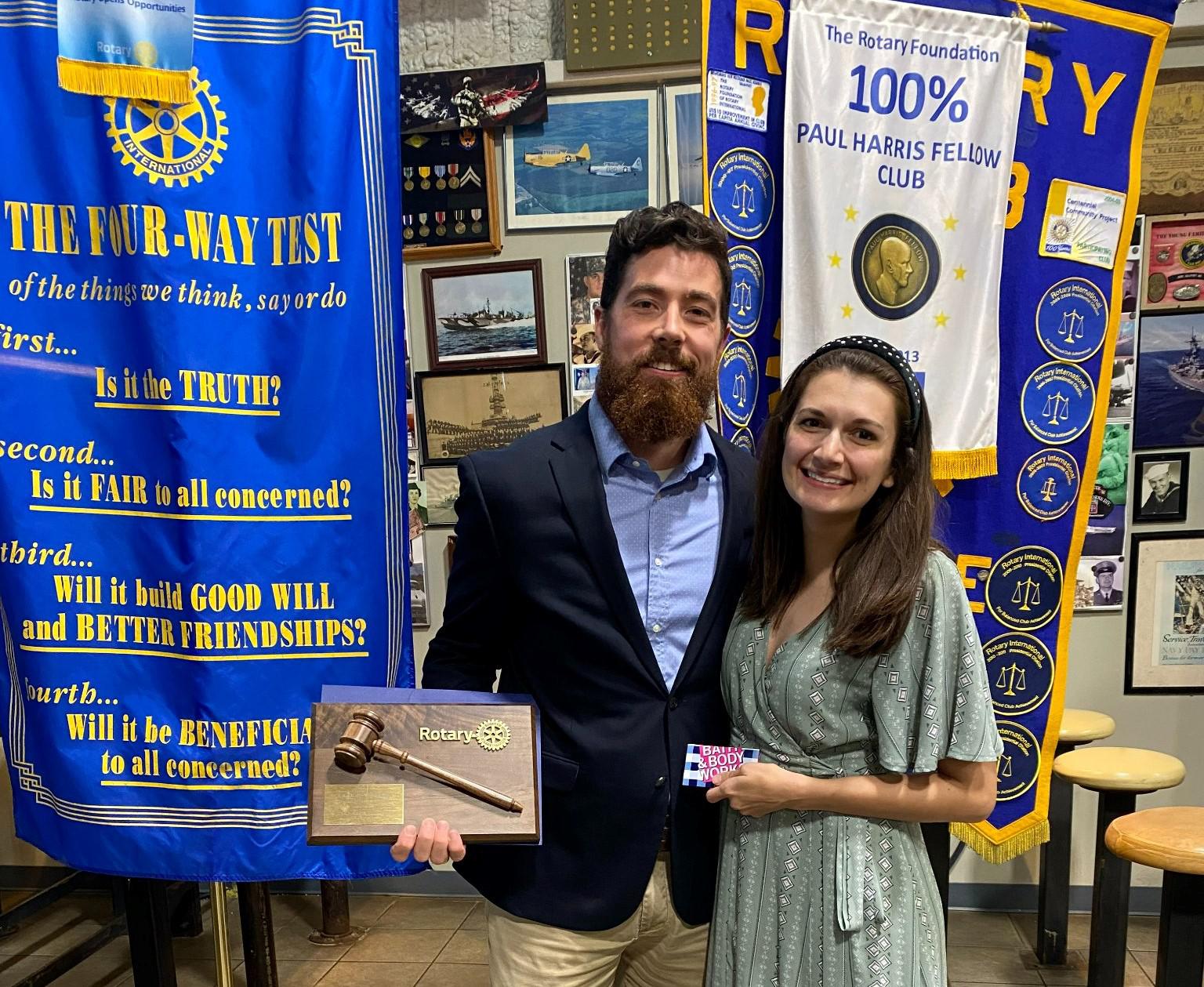 Two Rotarians. One male, one female. In many ways, they couldn’t be more different; in others, much the same. We celebrate Doris Lockey and Travis Walker today.

Travis Walker is the past president of the Rotary Club of Conroe. He joined Rotary in August 2016, at the request of an associate. Newly married at the time (married in May 2015), Travis was a professional under 30 in the early years of his career. Rotary proved to be a good choice for him as he expanded his network of professional and community services in the community. From the start of his Rotary membership, it became clear that Travis was a leader in the making. He and his wife Taylor have two beautiful young children and his career has blossomed.

Doris Lockey is the past president of the Rotary Club of Lake Conroe. She joined Rotary in 2000, sponsored by a dear friend and was originally a member of the Rotary Club of Conroe. When retirement called, Doris transferred her RCLC membership to continue her community service work closer to home in Montgomery, but not before serving one term as CCR President during a year of great transition for the club. Since joining RCLC, Doris has served not once but twice as Club President and served as our District Governor for the year 2015-2016. She worked for decades with the Rotary Youth Exchange before taking a senior position at Rotary International on The Counsel of Legislation. Her husband Wally and daughter Dorene are both Rotarians at RCLC with her, while her son Lawrence is busy with a career in the state of Texas. It’s a Rotarian family if there ever was one.

The differences between these two leaders are pretty obvious, aren’t they? But put them together in one piece, and you’ll see they’re cut from the same cloth; they both believe in the Rotary motto “Service Above Self” and more importantly, you would see that they both embody the test of the 4 ways of Rotary in their daily lives.

“It has been an honor to serve as President 2021-2022,” Doris told me, “We have once again shown that we are committed to making a difference in our community and in the world through our service to the Rotary. I look forward to the new Rotary year and serve again with a club known as “The Little Club that Can…and Does…We have launched a new club fundraiser this year” Rotary Roll Wine & Beer Tour.” We had 10 individual service projects, including our legacy project, “Memory Park” and our district grant project “Children’s Clothing.” We awarded a scholarship high school students and a Linda Ricketts scholarship, and has made major donations to numerous international projects.

Travis also gave us a summary of his year. “The past year has flown by. It has been an honor and a privilege to serve the Rotary Club of Conroe for our 89th year of service. I’m thrilled that we’ve continued the 20+ year tradition of I Like Me! Books, because we donated over 3,000 books to students at Conroe HS and Caney Creek HS Feeder System. Thanks to the support of every valued and active member, we were able to serve locally, through book donations, craft bags for Texas Children’s Hospital, breakfast bags for Meals on Wheels, and fundraisers. funds with the Salvation Army. We have served internationally through Shelter Boxes for Ukraine and Candy Rolls Stuffing with the Lake Club for children in Mexico. These things, along with a multitude of other local service projects and beyond, have impacted not only our community, but me. The members of this club and the service they have rendered to me have marked me more than I had anticipated at the beginning of the year. I am delighted to hand over to President Derrick for the next year and look forward to serving alongside him.

Two incredible Rotarians, that’s for sure! We thank them for their service. It’s a beautiful thing!

To learn more about Rotary, contact Kris by email at